Hit enter to search or ESC to close
Baklava Blog

Baklava of the Month – Traditional Walnut 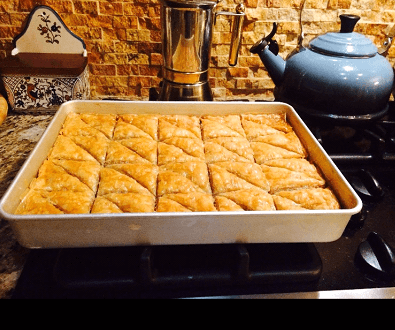 There is a reason I chose my Traditional Honey Walnut Baklava as my January Baklava of the Month: It was the very first baklava I ever learned how to make. Most of you already know my baklava origin story as there are a few videos online that tell it; but for those of you who don’t, I’ll give you the Reader’s Digest version.

When I was 16 years old I started working for a Greek family in North Carolina where I grew up. They were three brothers, two of which were married with kids. They all lived on the same street and had all come to the United States as adults. While they were very successful in the restaurant business, they relied on good help to navigate through our culture and language. Once they realized that I was “good help,” they utilized me in lots of different ways. In addition to working at the restaurant, I babysat their children, paid their bills, and picked up their parents and brought them to work with me on many occasions. 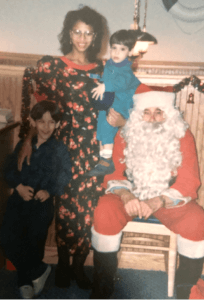 I was around “the Greeks” (as I called them) a lot, and over the years I learned a ton from them—not only about their country and culture but about life and business in general. They were extremely proud of their roots, and I was introduced to all things Greek while in their homes. I was curious about it all. It was very different from my African American culture, but they reminded me a lot of my own family in many ways: family was important, food was always part of the festivities, and they were loud. They primarily spoke Greek around me unless they were speaking to me directly, but I didn’t need to understand what they were saying to absorb from them.

When my boss would ask me to pick up his mama or daddy, it was never a quick honk of the horn and Nick (Papou, Greek for “grandfather”) hopped in the car. I had to park, ring the doorbell, go in for Greek coffee and treats, and smile while awkwardly eating. It was awkward not because I didn’t want to be there nor because I didn’t feel comfortable; I couldn’t stop speaking in English and they couldn’t stop speaking to me in Greek, and none of us understood each other.

I was always interested in what Yiayia Maria (Greek for “Grandmother”) had to offer me, and she could tell I wasn’t just being polite. She would show me the pastries she baked and would explain them to me in Greek and I would look and respond back in English. It was a dance we did every time I went over. Let’s just say, there was a lot of smiling and you don’t have to understand a particular language to understand the meaning of a big smile. She and Papou have long since passed away, but I still remember their kind, warm faces and their proud Greek spirit. I was so smitten with the years I spent with the Greeks that I never forgot the recipes long after I left their restaurant and North Carolina behind for my adventures in Spain and then my life and family here in Utah. 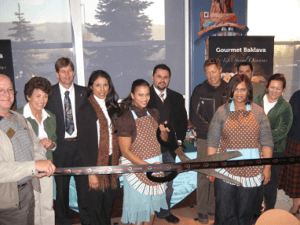 Over the years, I’ve expanded on that first baklava recipe and have run wild building upon it. In 2008 after tinkering with my recipes for years and sharing them with friends, I opened Sheer Ambrosia Bakery. Enjoy my version of Traditional Greek Walnut Baklava and Happy New Year! May 2021 be a blessed and healthy year for all of us.

With lots of LOVE,
Rita Magalde